Happy Holidays, all! Is it just me, or did Fall suddenly appear? Mind you, this is perhaps the longest I’ve gone between blog posts, and I’m filled with equal parts guilt and contentment. Life has continued to be busy, both professionally, and personally, and it has caused my priorities to shift a certain degree such that more regular musings on my running haven’t necessarily had the same urgency that they once did. I’ve spent the fall continuing to run, but with more frequent, shorter runs to accumulate the mileage and keep my streak alive. I may not have been able to commit myself to the intensity of training I would have liked over the past few months, but the miles have been consistent, and the joy of running continues to fuel my movement. The daily chase is real, and the motivation to continue chasing 42 is as strong as ever. Have you thought much about the changing periods in your own life, and the impact that has on your running? Does running mean different things to you at different points in your life? It’s nice to pause and give it some thought. The miles will mean more and the motivation will rejuvenate you no matter where you’re at in your own running journey! 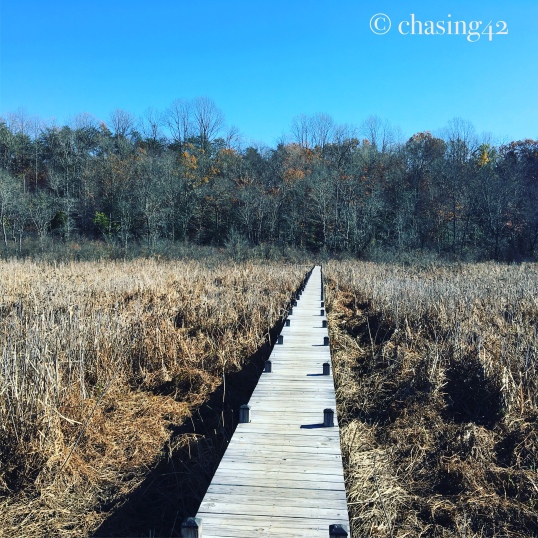 It was a beautiful morning to #optoutside.

Run: So, it’s been two months since my last log. I’ve been running. Each of those days. Consistently. The streak is still alive and now into it’s third year. That’s pretty good, eh? My Fall racing season lacked some of the focus and targeted racing that I’ve had in previous years, but it was enjoyable nonetheless. After Laurel Highlands, I think I thought I had so much time to plan out my Fall season, and I kept putting it off. Eventually, I ran out of time and never managed to find a true A-race like those I’ve had in the past. I wanted to target a 100 mile follow-up, but it just wasn’t in the cards this fall. Perhaps my mind and body needed the rest regardless of my intentions. At any rate, I still managed to experience my first self-supported ultra distance run in the mountains courtesy of the SRT 30-Miler in the Catskills, and I enjoyed a soggy day in the mountains of Virginia during the Mountain Masochist 50-miler.  I wrapped things up with a local non-race I helped play a small part in planning on our home trails in Brandywine Creek State Park, and probably had the most fun I’d had in quite some time in the process! I’ve got my sights set on some exciting adventures next year as well, and I’m hopefully planning far enough in advance to lock them in for the sake of consistent motivation. It might be the off-season now, but the planning never stopped. What do you have your eye on for 2018?

Thought: It’s the day after Thanksgiving, a somewhat misguided holiday that marks the violent theft of native lands from countless tribes, and our consumer-driven society has invented “Black Friday” to encourage rampant consumerism and needless spending. However, it’s also the second year of the #optoutside movement, begun ironically enough by REI. There may be other issues to tackle when it comes to who accesses our national parks and outdoor lands, but I fully support the sentiment and the idea of investing in experiences and opportunities to reconnect with the natural world instead of contributing to its destruction. I’ve thought more about my own history with “Black Friday’ this year as well. I certainly got excited for and participated in the consumerism in previous years, and it felt natural until it didn’t. It’s also caused me to think more about the class and race issues wrapped up in a day dedicated to deep discounts on countless consumer products. In a country where happiness has been erroneously linked to the accumulation of material wealth, this celebration of “stuff” only further serves to entrench those of lower socioeconomic means in a state of perpetual debt for the sake of a short-lived dopamine hit Those with the means to purchase these goods at any time of year are far less concerned with finding deals. By default, these same individuals can more easily brush off the sales and #optoutside. So, I wholeheartedly support the push to #optoutside but I will give more pause before chastising folks who choose to line up in the wee hours of the morning for a store opening. Instead, perhaps we can think about how we can encourage a more diverse swath of the population to #optoutside not just the day after Thanksgiving, but every day, and consider who we can invest in the resources and infrastructure to make that more accessible. Until everyone has the means to #optoutside, there will always be those who settle for the great digital outdoors. #chasing42