So, it would seem that our collective post apocalyptic nightmare is in fact a reality, and we didn’t simply imagine the election we all lived through. Now, following a poorly attended inauguration (unless you have the magical ability to deny reality while looking at conclusive photographic evidence), and an empowering and energizing global march, we are left to deal the daily fall-out. Hopefully, you have at least some sense of just how bad pretty much every decision he has made thus far is for anyone who isn’t a rich, White, heterosexual male. However, regardless of your political beliefs, you are reading this blog because you are a runner. You like to be active and be outdoors. If so, then this administration should scare the s#@t out of you! Between the climate change denial, the relaxing of EPA regulations, the increased ability to sell public park lands, the silencing of research coming out of government agencies, and the ease with which pipelines are being approved, we are watching as the world around us is pulled apart at the seams. We can only hope that the other countries who signed on to the Paris Climate Accords pick up the slack and double down on the efforts.

On the flip side, if our Bobblehead of State succeeds in building his giant monument to human stupidity otherwise known as the wall, then someone will clearly need to organize a race from one end to the other 🙂 I’ve got dibs on the first FKT attempt!

Run: It’s been a solid two weeks of running. I’m still surprised by the mild winters in Delaware, but certainly don’t find myself complaining about wearing shorts in January. My volume has remained pretty consistent, and I’ve thrown in some solid tempo workouts and vertical gain pushes to mix things up. A week ago, I headed out to Brandywine Creek State Park and did hill repeats on one of the more difficult climbs in the park. Both the climb and descent were good practice due to the fairly technical terrain, and I managed over 2,000 ft of gain in a little over 10 miles so I was quite pleased. This past Friday, I had the afternoon off since I had to work yesterday morning. This meant a golden opportunity to do a longer run on Friday, and explore some of the trails in White Clay State Park that I’m not as familiar with yet. It was a perfect afternoon for a run, and I only managed to get a bit lost once, which is a big accomplishment for me. Not being able to run yesterday morning was a great reminder of the importance of being flexible in your training. Your training schedule needs to fit in with your life, and you need to be comfortable with adjustments when things arise that throw off your schedule. Things will always come up! 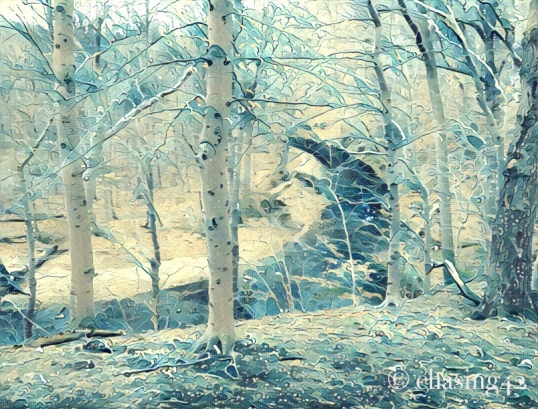 Thought: As I wandered around the trails at White Clay State Park on Friday, it occurred to me how unfazed I was by the prospect of getting lost. The park isn’t large by many standards, but for me, it was more about the realization that I felt comfortable enough with significantly longer distances that I wasn’t worried about getting off track. If I ended up tacking on 5 or 10 more miles, I didn’t mind. I had the daylight, some fuel, and confidence in where my endurance is at right now. It’s a very freeing feeling to know that you can just keep going, and know that it means you can do even more exploring than before, and simply have fun with it. I pretty much had the trails to myself, and that nature high just got more and more intense with each passing mile, each stream crossing, each hill climb, and each new switchback. Running has definitely given me increased physical fitness, but it’s the mental freedom that I’m most thankful for overall. I’m happy to be #chasing42, no matter where I’m going or how far it takes to get there!

Did you think I forgot about you? Well, I wouldn’t say it was forgetting as much as simply not having enough time 🙂 The training has been picking up over the last two weeks, and I’ve been doing my best to stay on top of everything else going on in my life. I’ll certainly never accuse my life of being boring, and that’s a sign of good decisions as far as I’m concerned! There is simply so much to learn, investigate, and explore in the world…so if you think you are bored, it probably just means you are boring 😉 Now, if that reality check didn’t offend you and scare you off, then read on for some more highlights and updates!

It’s nice to have so many choices!

Run: There has been a lot of miles and a lot of exploring going on in the past two weeks and it has made my training all the more enjoyable as I kept the #runstreak going! Here are a few highlights:

I love finding abandoned furnaces and other structures along the trails! 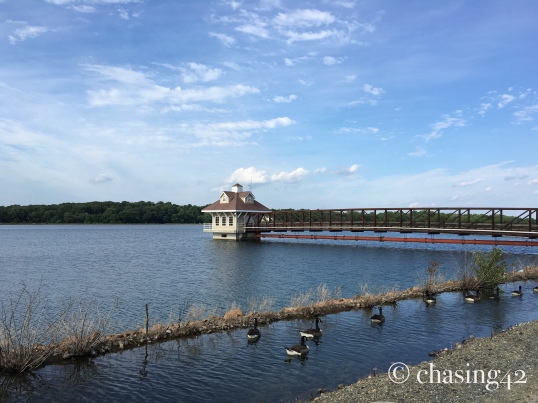 Thought: I finally quite waffling and registered for the Grindstone 100! I knew I needed a key fall race to really focus my training, but I was hesitate for reasons I don’t entirely understand. However, now that it’s a go, I couldn’t be more excited! It is supposed to be a fantastic race with some serious climbing, and it even starts at 6PM, so I’ll be running through the night when I’m awake and alert- score! It will certainly be a challenge, and I’ll be hitting the hill repeats and ramping up the mileage as the summer goes on, but I can’t wait for October 7th. My mind is ready for the challenge, and now it’s time to make sure my body is ready- time to keep #chasing42!

I truly enjoy the travel that accompanies many races. I’ve had the opportunity to visit parts of the country that I would have never sought out without a race, and I am certain that these experiences bolster my quality of life. However, there’s something to be said for a race in your backyard that requires minimal planning, very little travel, and being able to sleep in your own bed the night before. I’ve had that scenario play out for shorter races in the past, but this was the first time I’ve ever lived this close to a full marathon, and it ended up being a great opportunity to cross Delaware off my list and spend more time on trails I am quite comfortable running.

The April 30th Delaware Trail Marathon is put on by the Trail Dawgs, a local trail running group that hosts events throughout the year, and doesn’t take itself too seriously in the process. The laid back approach works well, and represents everything I love about the trail and ultra community. This particular race is held in conjunction with the Triple Crown, which challenges runners to tackle a half marathon, 10K, and 5K back-to-back-to-back. It also happens to be the only trail marathon in this tiny little state, and is held at White Clay State Park, which is a mere 15 minutes down the road from me. For all of these reasons, I was eager to race and hang out with some great folks along the way!

As I indicated, I was able to wake up around 6AM, throw on my clothes, have a light breakfast, and be at the park in plenty of time to pick up my packet and be ready for the 7:40 start. The course itself is two loops of the half marathon course, which meanders through White Clay Creek State Park. Although there are no significant climbs, the rolling hills still mean a decent amount of elevation gain, which I would be reminded of after the first loop. The half marathoners were sent on their way at 7:30, and the small group of marathoners (36 in total) lined up quickly and we were unceremoniously sent on our way.

I’ve run these trails several times in the past, but didn’t necessarily grasp the overall layout of the terrain. So, when I looked at last year’s results and saw the 4 hour winning time, it briefly crossed my mind that I could podium this year. Needless to say, this is not a possibility I’ve ever considered when lining up for a marathon. Thus, I went out with the lead pack and actually led the race for a good half mile before reality set in, and I slowed to a more comfortable pace on the rolling hills. The trails were in great shape, and the cool weather made for a perfect morning of running. I knew I shouldn’t be pushing it all that much, but I still managed to go out too fast, and the pace definitely caught up to me by the end of the first loop.

My favorite element of the winding course was the opportunity to cross White Clay Creek itself on 4 separate occasions. As you know, we’ve been getting plenty of rain lately, so the water levels were relatively high. This meant knee-deep water as we waded across the creek. My Lone Peaks drained really well so my feet dried out pretty quickly, and the cold water was a nice shot of adrenaline each time I jumped in!

I completed the first half in around 2 hours, and knew I had to pull up significantly, as my legs were feeling the burn. This had as much to do with a lack of recovery and sleep as anything else, and I had to remind myself that I was using the race as a long training run. I matched paces with another runner for the second loop, and we spent the next 13 miles running and chatting about all sorts of topics, which made the miles fly by that much quicker. More than that, it was a perfect reminder of why I love trail running so much. Smaller fields, and more shared experiences means you are always much more likely to end up meeting new people and having great conversations!

My running was itself pretty uneventful, and I was able to maintain a pretty even pace. The trails aren’t terribly technical so footing was rarely an issue, and it was simply a matter of relentless forward progress. The two of us came into the final stretch and ended up crossing the finish line at the same time for 10th and 11th place finishes. We received a coffee mug and a small medal, and made our way to the park pavilion for some food and drink. I hung out for a few minutes, and then hopped in my car, which was parked right at the start, and drove home to tackle the rest of the days chores.

It was beautiful in its simplicity, and I certainly won’t argue with an 11th place marathon finish, even if there were only 36 runners. There are many ways to keep #chasing42!