Archive for the tag “Market to Market Nebraska”

Normally, one of the biggest selling points for me when running a marathon or other race is the ability I have to control the outcome. I decide how much effort I put forth, when I push myself, and the perception of success is based on how I feel at the end of the day. Relays are a completely different story. I certainly have control over the legs of the race that I run, but beyond that, that overall satisfaction with the day depends as much on the people I’m running with, the weather, and a host of other variables. In this regard, I feel very luck to have so many amazing friends! This past weekend, I joined a group of friends, some new, and some old, and headed to Omaha, Nebraska for the Market to Market Relay. You may recall that I ran the Iowa iteration of the Market to Market relay this past spring, and the races are put on by the same directors.

We loaded up the car on Friday afternoon and headed west. Luckily, one of my friends is from just outside Omaha, so we stayed his parents for the evening. They were gracious enough to host us, as well as feed us a delicious spaghetti dinner. His dad was actually running with us the next day, so the circumstances worked out perfectly. We woke up around 5AM, and drove the 30 minutes to the starting line of the relay in Omaha. We fielded a seven-person relay team, and I was slotted to run the first leg, so they dropped me off at a park in Omaha, and took off for the first exchange point. I had to be there 30 minutes early to pick up the timing chip and check in, so I had some time to warm up, which was nice. Now, as you may recall, I have a rather lengthier race coming up in December, and my training calendar called for 28 miles on this particular Saturday. Thus, I knew I would need to squeeze in some extra mileage on top of my scheduled 3 legs of the 78 mile trek from Omaha to Lincoln. It was chilly enough that running around the park while I waited for our wave to begin at 6:40AM made sense, so I knocked out 2.2 miles and loosened up a great deal.

Is it time to run already?

I wasn’t entirely sure how my pace would match up with others in our wave, since they try to stagger start times based on team average pace. The first leg was a quick 3.2 miles (all legs were between 2.5 and 5.5), so I knew I could push it hard with fresh legs. It was still dark out, so I strapped on the required headlamp and headed out with the gun. I quickly worked my way to the front of the pack (only about 30 other runners) and figured I would see how long I could hold my pace. Aside from a few runners who were clearly much faster than I was, I held my own around 7:00 min/mile, and wormed my way down the dark city path towards the first exchange point. My lungs were definitely exerting themselves, but my legs were feeling good and I came in near a 5K PR, for which I was really pleased. I handed the chip off to the next runner, and met up with everyone else to hop in the van and head to the third exchange point. 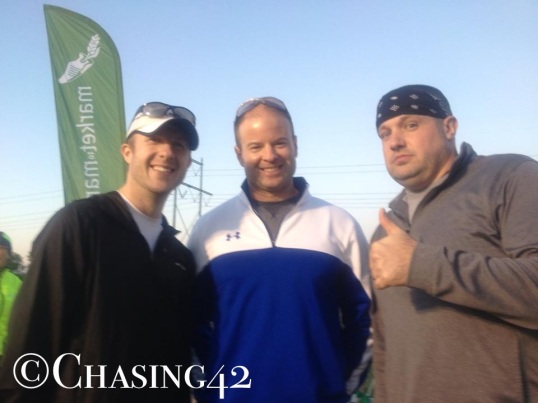 Beginning to wake up after a few miles…

It was still early enough that the lack of coffee in my system had not caught up to me yet. However, a lack of access meant I went the whole day without, and the caffeine headache certainly found me after another few hours. I knew that I’d need to find a way to run additional miles in order to reach my 28 mile training goal for the day, so I decided to join others on various legs in addition to my own. This decision ended up being a great choice and a lot of fun! The volunteers didn’t seem to mind or notice that there were two people from our team running, and it was fun to run with someone else as well. The short legs and driving between legs meant that everything was incredibly fast-paced, so being able to run with two of my teammates that I didn’t know as well gave me a wonderful chance to get to know them better.

Knocking out some extra miles with Ben…song stuck in our heads- “What Did the Fox Say?!”

Through the first set of 7 legs, I ended up running 3, including some quality time on a very hilly stretch of gravel road. Unless Market-to-Market Iowa, which was almost entirely on paved bike trails, this relay took us over a variety of terrain, including more gravel than I would have normally cared for or chose. I ran the 4th and 7th legs, and then just continued with the 8th leg, which was my leg to run in the first place. After the back-to-back legs, I was definitely starting to feel a bit more fatigue. I had completed a little over 15 miles at that point, which just enough down time to cool off but not really recover.

The stop and go nature of the day ended up taking its toll on my body far more than I imagined as well. My last leg was the longest at 5.2 miles, and after a relatively speedy first two miles, my quads started screaming at me, and I had no choice but to slow down a bit and push through the last few miles. I ended up running 7 of the 21 total legs, along with the final group run to the finish, for a total of 26.95 miles. Normally, my body tends to handle these distances really well, but the extended nature of the miles throughout the course of the relay left me more fatigued than normal. Additionally, I developed a hot spot below my pinkie toe on my left foot that irritated me more and more as the day went on. I’m not more convinced than ever that I need to see a doctor to figure out why I have so many issues with my left foot/leg, but never any problems with my right. In terms of nutrition, I wouldn’t say I ate well, but I took in mostly whole foods (trail mix, bananas, dates) and avoided chews altogether, and my body seemed to react very well, which was encouraging.

Strong at the finish!

We arrived together as a team to cross the final bridge in Lincoln, across from the University of Nebraska football stadium, into the finish area and after-party, and that last .3 miles was definitely stiff, but it felt great to cross as a team. In all, we tackled the 78 miles in 10:45, with an 8:11/mile average pace, which was mighty impressive in my book. More than that though, we had a blast doing it. As we sat at the after party, enjoying our free beer and pizza, the effort of the day began to weigh on us, and our energy reserves slowly reached empty. However, as we piled into the van for the drive home that night, we may have been exhausted, but we were happy, content, and leaving Nebraska as closer friends. That feeling of contentment is truly the appeal of relay events for me, and I was once again happy to be a part of the Speedy Streakers!

Well deserved after a long day of running!

Looking Ahead: A Busy Fall Season!

It is once again in the 90s today, which a bit of relief finally on the horizon for next week. For many of you, I realize that these temps are either a) commonplace, or b) desirable out of a love for summer. Aside from the more relaxed pace and change of activities, summer has never been one of my favorite seasons. I tend to find myself more productive the busier and more structured I am, so seeing Fall right around the corner is quite exciting! Classes at Iowa State began this past week (hence the late post), and my independent summer gave way to quite a bit more activity. I’ll be defending my dissertation this semester (fingers crossed), as well as teaching two classes, looking for a job, auditing a course, and training for my first 24-hour event in December. It’s going to be a busy next few months, and I couldn’t be more excited!

Aside from the “race” to graduate, October appears to be a peak month for crazy, so I thought I would provide a bit of a preview. Over the course of 3 weeks, I’ll tackle 4 significant races, and log quite a few miles in between. Along the way, I have no doubt that I’m going to form some wonderful memories with great friends, and I can’t wait.

This is the one weekend all month that I don’t have a race. However, I do have a 28 mile training run on the calendar, so I suppose I can call that an un-official ultra, eh?

I’ll be traveling to Lincoln, NE to run the Market to Market relay- Nebraska. As you may recall, I ran the Market to Market Relay- Iowa earlier this year and had a blast. I’ll be joining several of the same friends, along with some new friends for 78 miles of running from Omaha to Lincoln. The segments are relatively short, so the day should fly by pretty quickly, and I’ll probably squeeze in a few extra miles as well. It should be another great relay experience!

I’ve had the Indianapolis Marathon on my calendar the longest of my races this year. After running the Little Rock Marathon with a few friends, we decided we needed to do a fall marathon together so we signed up within a week of finishing Little Rock. The date and nice flat course must have looked mighty appealing, because close to 20 other friends signed up over the coming months, including the beautiful epicurean, who will be running her first half-marathon! The result will no doubt be an amazing road trip, a great race, and another state crossed off my list in my quest for 50!

Indianapolis was going to be my last major race before Across the Years, but that was before my friends decided to challenge my crazy! Several of them have thoroughly enjoyed going down to the Des Moines Marathon to cheer on friends. This race has a history of being a first half-marathon and marathon for many folks in our running community, including yours truly. So, they decided we should drive back from Indianapolis after the race to be back in time for the race. They also suggested I just go ahead and run the Des Moines Marathon as well. Obviously I couldn’t say no to this challenge, so here we go!

Nebraska is about the last “local” state I have yet to cross off my 50 states list, and I was eager to find a unique race to fit the bill. The G.O.A.T.z 50K was run on a series of trails near Omaha last year, and I had several friends who ran the race and thoroughly enjoyed it. I figured this would be a perfect opportunity to not only cross Nebraska off my list, but enjoy a trail race as well. Nebraska certainly isn’t a destination I would think about traveling to for any other reason, so it’s funny to me that I’ll be heading that way twice in a month! 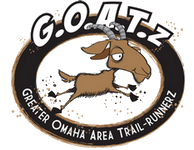 So, there you have it. I’m sure I’ll sprinkle in some other adventures as well, but I’m definitely looking forward to the running memories that October has in store for me!