Archive for the tag “JFK 50 Miler”

I’ve always been an eager student of history. The world is a strange and fascinating place, and there are more stories out there to explore than can be held in a single lifetime. That’s a large part of why “America’s Ultramarathon” has intrigued me for so many years. I first learned of the JFK 50 shortly after starting to run, long before I really had any grasp of the idea of an ultramarathon. I was fascinated by President Kennedy’s call to action of sorts, and the challenge of meeting the same physical requirements that President Roosevelt had held military officers to at the turn of the 20th century. Although numerous 50 mile races popped up following Kennedy’s call to action in 1961, the JFK 50 Mile race is still the only 50-mile footrace continuously held each year. The storied history has seen many great champions, and the military roots have remained strong and influential throughout it’s now 53 years.

With the pull of history in the back of my mind, the race became the first thing I registered for when the epicurean and I decided to move to Delaware for a new life adventure. I’ve had a rather busy fall race season, but have been looking forward to this longer than anything else, and I can say without a doubt that the experience did not disappoint. I drove west to Hagerstown, MD on Friday for packet pick-up and to check into my hotel room. I was flying solo, so I went for the cheapest room I could find, which proved to have considerable drawbacks but I made the most of it. I set everything out on Friday night to make the early morning wake-up call that much smoother, and actually got to bed at a decent hour, which is typically not my forte. 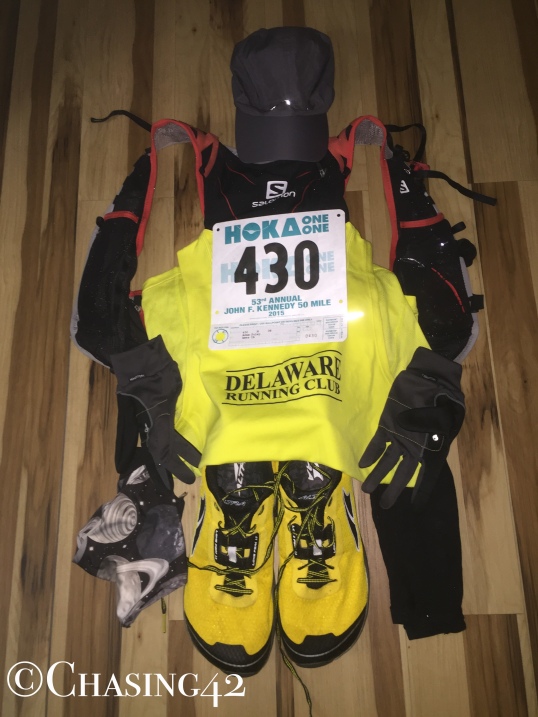 A 7AM race start meant waking up at 5AM to get ready, eat a light breakfast, and drive the 15 minutes to the start in Boonsboro, MD with enough time for a final “system cleansing”. I had hoped to make it to the pre-race meeting at 6:20, but ended up waiting in line for said cleansing a bit longer than expected. However, I still had just enough time to warm up in the high school, and then walk down to the starting line a few minutes before the gun went off. It was a brisk 27 degrees when the race started, so I was happy to have remembered arm warmers and gloves, along with my Buff for my head and neck (seriously, such a versatile piece of equipment!).

It was a chilly start!

I knew from studying the elevation chart and reading the course description that I was in for some climbing in the initial miles, but that really hadn’t quite sunk in. However, it only took about a half mile to realize that we were heading straight up. The first 2.5 miles were on the road out-of-town, before meeting up with the Appalachian Trail for a quick mile and then onto a fire road for two more miles. In those first 5.5 miles, we gained over 1,700 feet of elevation, which my quads could definitely feel. I managed to hold myself back a bit more than usual, however, so I was feeling good when we stepped onto the AT again at mile 5.5. This was the first race in quite a while that I had succeeded in not going out too hard, and recognizing that brought a smile to my face.

The next 10 miles or so were all along the AT, and luckily along a good portion of the trail that I was familiar with after my hiking adventure in October. Knowing what was coming didn’t make the trail any less challenging, however. Additionally, running along the rocky, rooty section was far more challenging than hiking, and I was definitely as focused as I have ever been during a run. It was still early enough in the race that the pack had not completely thinned out, and I tucked into a pack of runners the entire way, which meant I had much less room to stop or slow down much. Luckily, I’m fairly certain that the past 6 months of increased trail running in Delaware definitely paid off, and I moved along really well. I never once lost control of my footing, and only slightly slid a few times despite the leaf-covered ground hiding the roots and roots underneath.

I knew the last section of switchbacks was coming because I had hiked down them several weeks ago, but they still gave me momentary pause as I began the speedy downhill assault. Dropping over 1,000 feet in such a short period of time, all while running as hard as I could, was quite the exhilarating experience, and I loved every moment of it. When I reached the final few stone steps, it was clear to me why so many people talked about yelling joyfully after making their way down unscathed. This area was also a major meeting point for spectators and crew members, neither of which I had waiting for me, so I kept rolling along the trail towards the C & O Canal towpath.

Hmmmm…I wonder which section was along the AT?

In retrospect, I wish someone had been waiting for me, because I would have benefited from trading out my Altra Lone Peak 2.0’s for a much lighter pair of Hokas for the long, flat towpath section. However, this was not an option, and the Altras were still holding up beautifully and comfortably, as they had done countless times before. The towpath section stretched for just over a marathon (26.3 miles), and was a beautifully flat, crushed gravel trail. This meant I could zone out a bit more and just let the miles tick off. I had planned on making up a bit of lost time on the towpath, but I still managed to run the AT section a bit harder than I had planned, so my legs (especially my quads!) didn’t have quite the pep in them that I thought they would.

The towpath miles were ultimately more of a blur than anything else. I moved along pretty well for the duration of the segment, and made sure to take walk breaks every so often to make sure I had some energy left in my legs for the final 8.2 mile stretch. The biggest motivational aspect by far proved to be the aid stations along the way. This was without a doubt the best supported race I’ve ever run, and each aid station (and they were about every 2 miles!) continued to outdo the one before. Between Star Wars, Christmas, and a myriad of other themes, the volunteers really went out of their way to make everyone feel welcomed and supported. By the time I had made it onto the towpath, the pack had spread out considerably more, so I saw far fewer runners along the way. It was a treat to know there was an aid station every 2 miles that I could zero in on when I was pushing myself from one point to the next, and it made the long section that much more enjoyable.

That being said, I was still fairly bored with the towpath by the end, and very excited to leave it at the 41.8 mile mark, and hop onto the road for the final section. Those final miles were rather hilly and rolling, but the beautiful landscape made it easier to forget. Aside from some random aches and pains every once in a while, my legs were feeling good and I was excited to know I was so close to the finish. Reaching the final aid station brought a huge smile to my face, and I picked up the pace a bit, knowing I only had 2 miles to go. As I entered town, I could hear the announcers at the finish line, and that gave me the final push I needed to eek out a final kick to the finish. I crossed the finish line in 8:45:35, ultimately good for 129/794 overall, and knew I had earned the medal that was placed around my neck.

After lingering at the finish line for a bit to watch a few others come in, I made my way into the nearby school to wash up and get some food. As I sat for a bit and people-watched, I was reminded of just how much I love this community. This race definitely lived up to my expectations and exceeded them in many regards. I was certainly tired when I boarded the shuttle bus to take me back to the start and my car, but I was surprised by how much energy I still had. I knew others were still out there, and I sent them my extra energy to power them towards the finish. I probably could have stayed the night, but it was only a 2.5 hour drive, and I was much more interested in getting home and sleeping in my own bed. The drive back was a breeze, and the hot shower and hot soup (and cold beer) were a wonderful treat when I got home that night. History takes place around us every day, and many events often go unnoticed or forgotten. It was a privilege and an honor to be a part of history on Saturday, November 21st, 2015, for the 53rd Annual JFK 50.