Market to Market Relay- Iowa: The Speedy Streakers Have More Fun Than You

Tradition is a powerful motivator, much like friendship. It’s been a strange, transitional year filled with more changes, opportunities, adjustments, educational moments, challenges, and triumphs than I’ve experienced in quite some time. In fact, I’m pretty sure my life hasn’t been this topsy-turvy since I graduated from college. I’ve done my best to stay positive about everything being thrown at me, but the reality is that there have been good days and bad. Without a doubt the hardest part of leaving Iowa was leaving such an amazing group of friends. My running journey began with Team Vardo and our paths will forever be linked. So, I was understandably quite excited to make the trip back during the first weekend in May so see so many amazing people, and run a relay event that I’ve been able to participate in for the last 4 years. 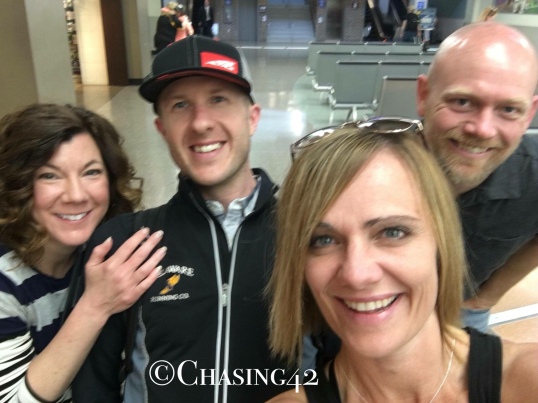 Welcome back to Iowa!

My flight was much too early on Friday morning, but the Philadelphia Airport was of course already a buzz when I arrived around 6AM. After the requisite waiting, I did my time in a steel tube and landed in Des Moines mid-morning. Several friends were there to greet me, and it was wonderful to see their smiling faces when I got off the escalator! We hopped in the car, and it was go time. Friday afternoon was all about relay prep and we managed to stop for lunch in Des Moines as well before heading back to Ames. Ironically, it was in the low 80’s when I got there, which was much warmer weather than Delaware had seen to that point. My body wasn’t necessarily acclimated, but it felt great to feel the sun beating down on me.

We met up with some other friends around 3pm for a short run. I had to keep my streak going 🙂 It felt strange to be “visiting” as we ran through campus and along roads I have logged so many miles on in the past. It was still great to be back and most of my sense of direction returned as we marked out our route. After about 5 miles, we headed back to the gym to shower, then grabbed a drink at a nearby restaurant before heading to dinner to meet up with a larger group of Vardos. It was fantastic catching up with so many people, and the caring and thoughtfulness that made me fall in love with this crazy group came out instantly and it was as if no time had passed. Of course a year had passed so there was plenty of catching up to do, and the time went by far too quickly.

Visiting The Pig again this year!

After dinner, the Speedy Streakers piled into the van (minus one teammate benched by family obligations) and down to Jefferson. We stopped at The Pig (bar) for our customary drink and dollar signing, and the bartender greeted us with smiles and sarcasm, just has she has every year! I was pretty tired at this point, and it was probably for the best that we made our way back to Nicole’s parents’ house and got settled for a few hours of sleep. Our starting time of 8:30 the next morning was later than we’d started in the past (I think we may have overestimated our speed!) but it did mean sleeping in a bit longer so nobody was complaining.

Everyone got ready, pulled out their costumes, and had some light breakfast before we piled back into our moving base for the day and made the 5 minute drive to the starting line. We didn’t end up with an overall costume theme, although the ladies (and Ben) did manage some spectacular sock monkey costumes! Our goal this year, as every year, is to have fun first, and to run second. I wanted to run as many legs with as many people as possible this year, and I certainly had the chance to make that happen. I ran the first leg, as I’ve done every year, along with several others, and we traded off and Eric and I kept running for the second leg as well.

Are you sure you’re ready for us?!

The weather had cooled a decent amount, and storms were threatening during the morning but nothing much came of them, aside from a short delay for lightning in the area. The legs ticked off pretty effortlessly, as we were all really familiar with the route at this point, and we made sure that numerous folks were running each leg so everyone always had company. The overall mood was perhaps a bit more mellow than in previous years, but the pudding and Jell-O shots were still flowing freely. It felt really comfortable to be back there, in that place, with such an amazing group of friends, during that event. In many ways, it almost felt like home in a way. I suppose that’s the result of being so completely comfortable with a group of people and an area, eh?

Ticking off the miles!

I ended up running 5 of the first 8 legs, and the morning hours flew by quickly. I was determined not to push as hard as I had in previous years so I still had some juice for the late stages, and I finally succeeded this year. I ended up running 8 of the 17 legs in all, including the hilly detour leg at the end, which didn’t seem nearly as bad as I had remembered it from a few years back. Thank you, Delaware hills! We made our way to the finish area and waited for Carla to come in on the anchor leg so we could all join her and cross the finish line together. She looked strong coming in, and we all made the final push through the finish line as they announced our names, and we picked up our finishers pint glasses. Another M2M Relay was in the books!

The evening ended up being pretty low-key as well, as we made our way back to our hotel room to shower and head out for dinner and drinks. We ate at a new pub/restaurant with enough beers on tap to make my head spin, and it was a perfect way to close out the night! Everyone slept soundly, which made getting up at 6AM all the more difficult. I got dressed quietly, along with Lani and Steve. I was able to say goodbye to everyone, even if they don’t remember it, and we headed to the airport so I could catch my 9AM flight. Leaving was bittersweet as I said my final goodbyes and began my journey back to Delaware. Leaving a place you called home for so long, as a visitor, for a new home, is a strange feeling, and it left me with plenty of mixed emotions. This trip was a much-needed means of connecting with many people most important to me, and at the same time a difficult reminder of just how much has changed, even if the people haven’t. The Speedy Streakers, and the Vardos as a whole will always hold a special place in my heart, and I’m now more committed than ever to making sure I maintain those connections and those friendships for the long haul! The Delaware Chapter of Team Vardo is stronger than ever, and waiting to welcome others to the world of East Coast running 🙂

Tradition, family, and running are interconnected for me. You simply need to return to some races…they mean more than simply a medal or a finish time. Times and logs never tell the full story. The power of running rests between the miles, in the conversations, the smiles, the trust, and the memories. Remembering that is as important to #chasing42 as any race will ever be!

2 thoughts on “Market to Market Relay- Iowa: The Speedy Streakers Have More Fun Than You”