Race Report: Across the Years, Part 1

“It’s a dangerous business, Frodo, going out your door. You step onto the road, and if you don’t keep your feet, there’s no knowing where you might be swept off to.”

In the end, I suppose the race you think about most is the one you’ve yet to run. Such has been the case for me over these many months as I have trained, preparing mentally and physically, for the challenge of my first 24-hour event. After countless hours of discussion and planning, and still more miles, the moment of truth finally loomed as I boarded the plane for Phoenix. I had just celebrated my newly-minted doctorate, and shared in Christmas festivities with my family, and now it was off to Phoenix to celebrate Christmas with the beautiful epicurean’s family…and then there was the matter of a little race. I kept my nerves in check for the most part, although my packing deliberations were particularly time-intensive this go around, as I attempted to make sure I didn’t forget anything that I was sure would make or break my entire race. Obviously my OCD was overruling my logic at the time.

When we left Des Moines, the mercury struggled to move past -20 degrees. We arrived in Phoenix early on the 24th, and had plenty of time to settle in, and rest. We enjoyed a wonderful day with family and friends, and nestled into our beds, relishing the 80-degree temperature swing. I woke early on Christmas morning, not as a result of the nervous stomach that characterized my youth, but out of a desire to squeeze in a morning run before the days festivities. It felt wonderful to merely slip on a pair of shorts and a short-sleeved shirt, and the brisk air  (it was in the low 40s) felt wonderful on my skin as I headed out to explore the local trails. I managed to take it fairly easy, but loved being out in the “warm” morning air, and taking in the amazing scenery. There is truly something about looking out and seeing the sun rise over the mountains that can’t possibly ever get old.

Not a bad way to greet the sun on Christmas morning!

Our condo for the week was only a few miles from Camelback Mountain so clearly I needed to take one final warm-up run to explore the trails. I headed out on the 26th and ran the 3 miles or so to the trailhead, and headed up just a bit to get the blood flowing through my quads. Quite frankly, I probably could have done without this run altogether, but how was I supposed to resist the opportunity to leave my door and end up ON a mountain?! It was still early and there weren’t many folks out yet, but I still had to dodge some holiday hikers. I ventured up about 2/3 of the way, stopping along the way to snap pictures that may look all the same at a distance but surely present something unique and enticing with each angle and elevation change. I arrived back at the condo, endorphins coursing through my body, and more excited than ever for the race I was to run in a mere 48 hours. Later that afternoon, we went for a short hike along another set of trails. We were in Arizona…what did you expect? 🙂 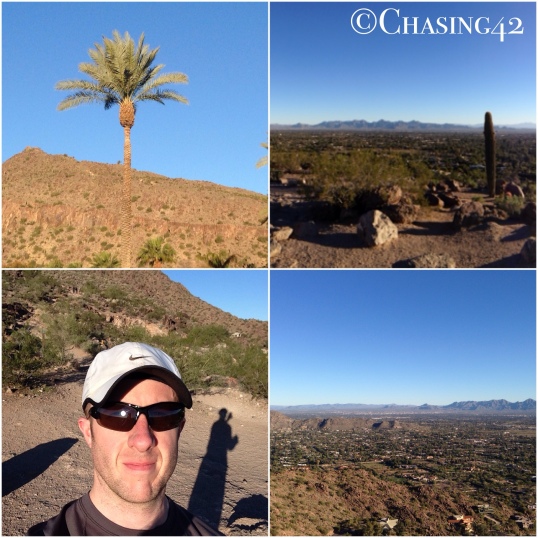 Why aren’t there mountains in Iowa?

Friday was dedicated to shopping and final preparations. There were several co-ops and natural foods stores in the area, which made shopping for my nutrition needs quite easy. We did our grocery shopping, and then headed to a local running store to pick up a travel foam roller. I was fairly certain this would come in rather handy, and would serve me well in the future also (review forthcoming). When we finished our shopping for the day, we relaxed, ate dinner, and I went through my mental and physical checklists. I really had no idea what to expect in terms of the aid station or my own nutrition needs (and wants) throughout the race so I decided to play it safe and ultimately over-prepare (although I didn’t know it at the time). I packed my nutrition “dose” for each of the 24 hours into individually labeled ziplock bags, along with some additional whole foods (dates, trail mix, bananas, vegetable pasta, coconut water). I also bought a large jug of water, and dropped in 5 Electro-Fizz tabs to turn the entire bottle into electrolyte water that I could either fill my handheld bottle with, or drink directly from the jug itself.

I hope I packed enough 🙂

After organizing my nutrition needs, I turned my attention to the remainder of my gear. The forecast was for low 70s during the day, and low 40s at night, so I packed for layers. I pulled out all the compression-gear stops and elected to wear both my shorts and socks. Both have served me well in the past, and I hoped for the same during this distance challenge. I packed a long-sleeve shirt, as well as my windbreaker, and a thin pair of tights just in case. Gloves, extra socks, my hat and sunglasses, and a handheld bottle rounded out my gear planning. This was also going to be the longest test for my Garmin 910xt, which I was hoping would get me through a majority of the 24-hour run.

When I woke up on the morning of the 28th, I was pretty sure that I had covered all my bases, and thought of just about everything I might need. I had a Cliff bar and a banana for breakfast, along with a Naked Juice Green Machine smoothie. Then we loaded the car, and headed to Camelback Ranch to check in and get our tent and supplies set up. We arrived around 8AM, which gave us plenty of time. I picked up my bib, along with the bib belt they supplied, and my GPS timing chip, which I wore around my ankle. The beautiful epicurean sprayed me down with sunscreen, and I had about 20 minutes to walk around and try to shake out the nerves. The large grassy field was filled with tents, tables, coolers, camp chairs, and athletes of all ages milling about, preparing for the start of the race.

The entire Across the Years race lasted for 6 days, with runners electing for the 6-day, 72 hour, 48 hour, or 24 hour duration. As a 24-hour runner, I had the option of starting on any of the first 4 days, which was nice for planning purposes. The course was a 1.05 mile loop around Camelback Ranch, the spring training home of the Los Angeles Dodgers and Chicago Whitesox. The path was well maintained, with patches of pavement or concrete breaking up the finely crushed gravel (think baseball field warming track). We would run continuous loops around the course, registering our laps with the sensor on the timing pad at the start/finish. Right next to the timing pad was the full-service aid station, as well as a well-organized first aid station. It was clear from the beginning that this was an incredibly well-organized race! 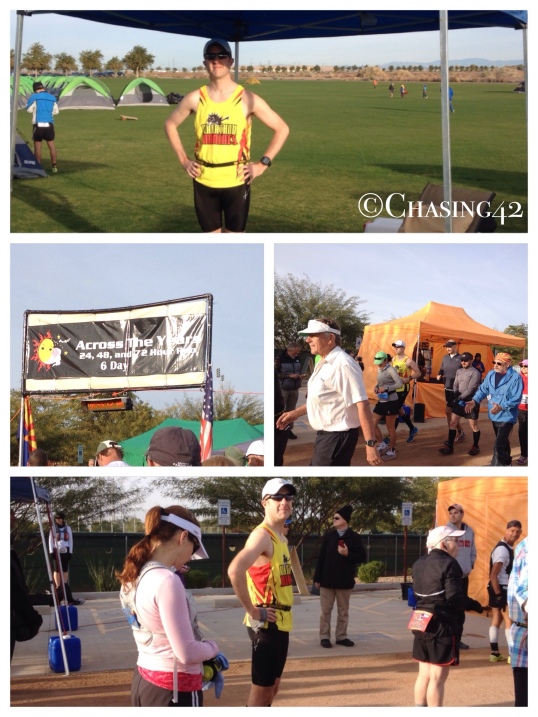 So, I made my way up to the starting area as 9:00AM approached. The race director provided a few last-minute announcement, and then sounded the gun. The 75 or so runners beginning that day took off, and the “race” was on. I knew going in that pacing and energy would be my two biggest obstacles. However, over the course of the next 24 hours, I learned far more about myself.

…to be continued in Part 2

One thought on “Race Report: Across the Years, Part 1”